Ask any sportsperson what it takes to win a championship and they’ll tell you things like dedication, endless training and great sacrifices. They might detail the meticulous preparation of their equipment and seemingly disproportionate investments in upgrades to save a watt or two. At ENVE we know many such athletes and we’re proud of every victory they take on our wheels. A homegrown win is even better, so when two of our staff – Mark Currie and AJ Turner – won the Utah State Tandem Championship we had to find out how they did it.

Guys, congratulations. We can’t imagine how much work must have gone into this. How long have you been riding and racing tandems together?
AJ: Well, the race was 35 minutes and our test ride was about an hour, so I guess we’ve been riding tandems together for an hour and a half…
Mark: Ha! That’s the funny thing. The first time we saddled up on the tandem was at lunchtime on Friday afternoon, the day before the race.

Uh, right. Tell us about the bike then, it must be something special for you to jump on and go fast straight away.
Mark: Not exactly. It’s a 12-15-year-old Cannondale Tandem, made in the USA. It’s likely never had such a throttling but it handled it fantastically. Not one minute after showing up at the parking lot an apparent “tandem TT expert” came over and told us that we had the wrong gearing and that we’d be totally spun out, but it turned out to be spot on.

No practice and an old bike… Time to ‘fess up to your secret weapons guys. We know you’re both racers packing serious engines, and then there are those wheels.
AJ: Well, Mark races mountain bikes at pro level. I’m just your standard category 1 roadie.
Mark: The wheels were the only piece of aerodynamic gear on the entire set-up. We ran 7.8 Discs set up tubeless with 25mm tires. We were told the thing sounded like a jet engine coming down the road.
AJ: Yeah, the 7.8s were probably the most critical part of our win, but they were our most basic factory build on DT Swiss hubs, nothing extra-fancy.

OK, tell us how it went down.
AJ: The race was the Utah State Time Trial Championships out near the iconic Salt-Flats just west of Salt Lake City. We noticed there was a tandem category about a week before the race, decided to dust off the tandem, throw on some fast wheels, and give it a go.
Mark: Being a mountain biker, the course was about as uninteresting as it comes – literally, a flat, straight course which turned around a cone at halfway and headed straight back toward the finish. We set off 30 seconds behind another tandem, who were going for the full aero approach.
AJ: We lucked out with being the very last riders, giving us plenty of rabbits to chase.
Mark: We caught and passed the other tandem just before the turnaround. On the way back, AJ turned around, saw them attempting to draft us and yelled up at me, “Give her one more gear!”. We got into our biggest gear, dropped the hammer and that was that.
AJ: This was the best part of the race, seeing the mental defeat we’d put on the competitor and the gap we’d built immediately after that one more gear and a little more power.


Way to go guys. We like your style – taking nothing seriously except the pedaling. 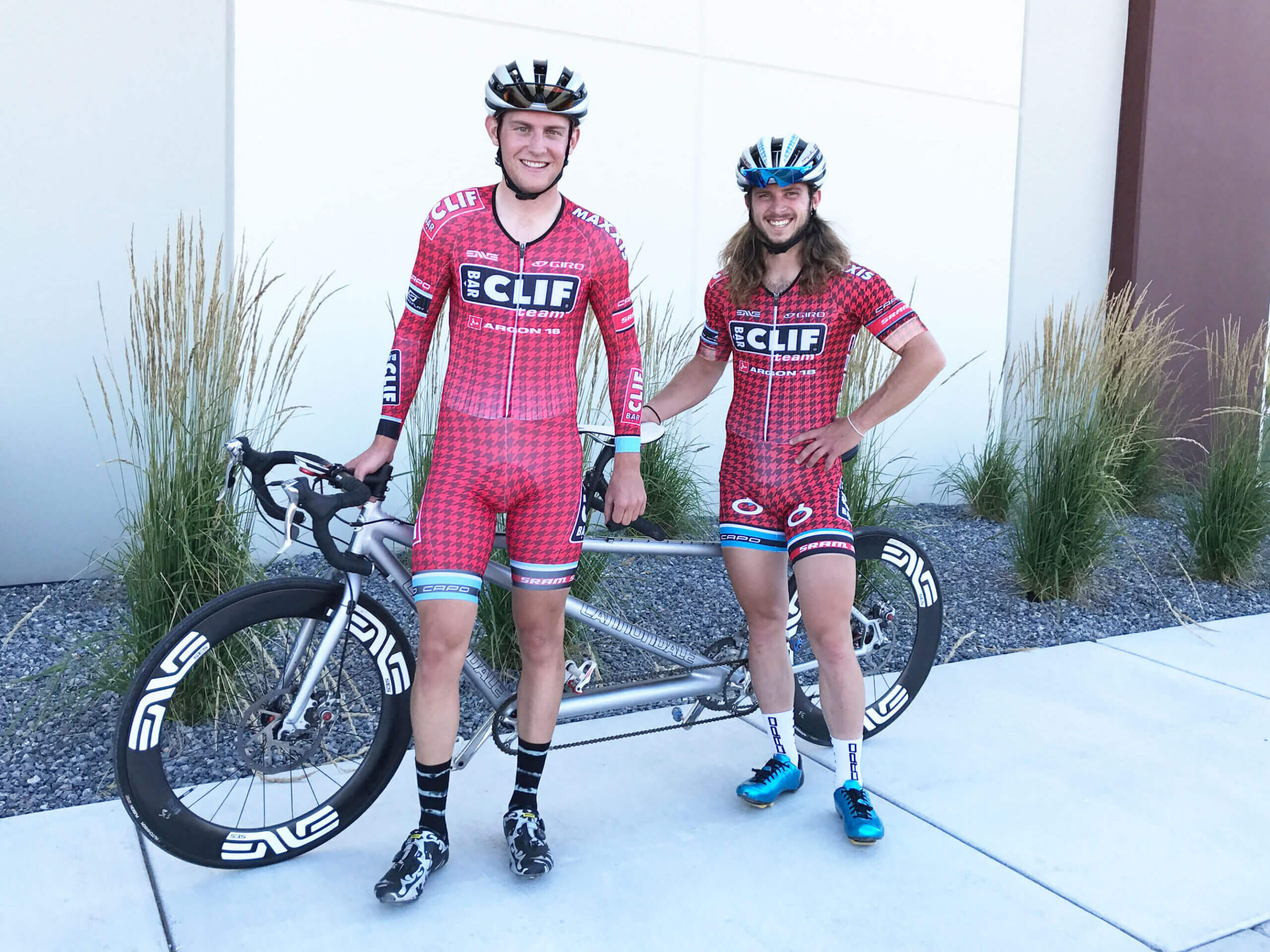